Platelet-rich plasma injection is a non-surgical approach to treating injuries or conditions of the foot and ankle. Platelet rich plasma (PRP) is concentrated portion of blood plasma enriched with platelets or containing more amounts of platelets. Blood plasma contains vital growth factors that help in repairing the injured tissue and platelets contain Vitamin K that plays a major role in formation of blood clot. This therapy is used to treat foot and ankle pain, ligament or tendon problems, plantar fascitis, and many other conditions that affect the foot and ankle. 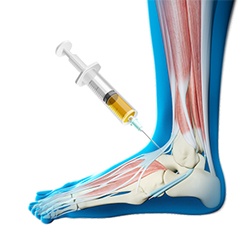 The tendons and ligaments have very poor blood supply and will delay the time of healing. Injection of PRP results in accumulation of excessive amounts of platelets at injured site. Platelets degranulate releasing several growth factors and cytokines which stimulate one or more phases of tissue regeneration.

In this procedure the blood is drawn from your body and centrifuged to separate blood plasma (liquid separated on top) and blood products (settled at the bottom). The plasma is taken and kept aside in a sterile injection. This is later injected in a sterile environment into the site of injury to reduce pain. An ultrasound is done by the physician to find out the actual place of injury. This will form blood clot and help in degranulation of platelets which releases the growth factors to the site of injury. These growth factors associate with other blood cells (monocytes, neutrophils, fibroblasts) which help in the healing the injury.

PRP therapy uses our own blood. Hence the treatment is associated with minimal or no risk factors, or contraindications. However, it is also used in the formation of bone in cases of fractures which helps in the formation of new bone tissue. It helps in patients being active however is limited to activities like swimming and biking.

Shockwave therapy is an innovative physical therapy treatment method during which high energy sound waves are directed into the body. These shockwaves are said to make the process of healing faster and also improve blood circulation in the area of treatment. Shockwave therapy is a new treatment option designed to treat different types of foot and ankle pain. 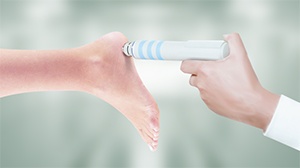 Some conditions that have been treated with shock wave therapy include heel spurs, plantar fasciitis, and achilles tendonitis.

Shock wave therapy is given only when the other conservative treatment methods such as rest, pain medications and physical therapy do not show improvement even when used over a period of 6 months. It is used as an alternative treatment modality to surgery.

Most of the patients who undergo shock wave therapy show significant reduction of pain and improvement in movements of the affected part comparable to other conservative options. It has advantage of being as effective as surgery, with no complication of infection. The side-effects include only temporary redness, pain and swelling at the site of treatment. You can return to work or do normal activities within one or two days after the therapy.

The mechanism of action of the therapy although not very clear has shown to increase the blood flow in the applied site and is believed to thus increase natural tissue repair in the region.

Procedure: Shock wave therapy is given after numbing the region by giving local anesthesia. Shock waves are directed through a hand-held probe which is moved over the skin of the affected site after applying the ultrasound gel .The sound waves are given as short pulses of less than 1 microsecond. Only 1 to 4 pulses are given per second. Treatment usually involves 1000 to 4000 pulses. Thus the treatment takes only 14 to 30 minutes. The number and intensity of the sound waves will depend on the severity of the conditions. Complete treatment may require one or more sessions of therapy.

The safety of the shock wave therapy has not been evaluated in pregnant women and children and should not be used for them.